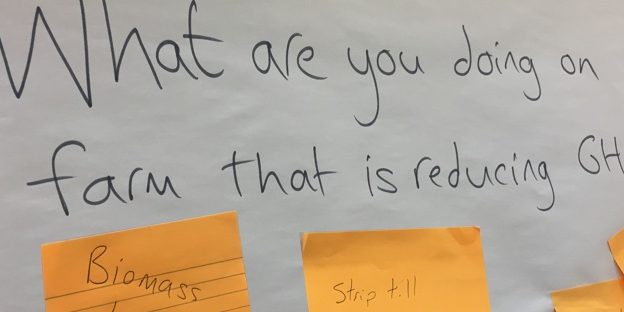 As usual, the weather has been uppermost in farmers’ minds this season, but as TMAF we have an eye on future climate trends which is why we hosted a workshop to gather farmers’ reactions to opportunities to reduce greenhouse gas (GHG) emissions on-farm as part of a Defra-funded research project.

Report says farming “can and must do better”

The UK has set an ambitious target for the UK to reduce its GHG emissions to zero by 2050. But, the chapter on agriculture in the latest progress report to Parliament by the Committee on Climate Change in 2018 makes sobering reading. Our sector is reported as achieving “virtually no change in agricultural emissions since 2008”. Agricultural emissions account for 10% of UK greenhouse gas emissions. Defra have commissioned a short project to consider the feasibility of GHG mitigation measures on-farm.

The project is being carried out by SRUC (Scotland’s Rural College), the Centre for Ecology and Hydrology and NIAB. First, the project team have collated emission reduction proposals measures that would reduce GHG emissions from farming. Now is the consultation phase when that range of measures are being discussed with farmers to help to understand what could be implemented practically and how. NIAB’s Elizabeth Stockdale ran the workshop. “This is an important opportunity for farmers to give their views on the priorities and practicalities that have been short-listed” she explained. “It is great that TMAF have included this as part of their annual Innovation Day.”

Having been asked what was already being done on their farms to reduce GHG emissions, the next activity was for each farmer to be quizzed with Farm Carbon Calculators. According to the Farm Carbon Toolkit agricultural greenhouse gases include nitrous oxide, methane and carbon dioxide. Do farmers know which are the most GHG-emitting operations? And the most carbon-catching?

The first test put to the group was to allocate (from a selection of given numbers) what they thought to be the largest and lowest carbon emissions of a variety of farm inputs which included 1000 litres of diesel, 10 tonnes of concrete, 100hp new tractor and I tonne of 33% nitrogen fertiliser.

Second up, the farmers were asked to rank the quantity of carbon sequestered by I ha of broadleaf woodland, 1000 metres flailed hedgerow, 1000 metres uncultivated field margins and 0.1% increase in soil organic matter/ha/yr. The result, that many of the answers chosen by farmers were wrong, proved a good starting point for discussion and the next activity.

Elizabeth Stockdale revealed the on-farm GHG-reducing practices that are being considered as part of the Defra-funded project. Attendees ranked these from ‘easy’ to ‘hard’ and commented on what each one might mean in practice and the implications, if any, to the business. The results from the group that met together at TMAF are as follows, starting with easier to implement:

Speaking for several in the group, Ed Cross, who farms in northwest Norfolk, commented that “We would need farm-scale carbon budgeting to develop a specific carbon management plan on our farm.” Following this, the group turned attention to what else could help farmers reduce GHG emissions.

One of the top suggestions of what would help farmers was a funded, independent source of information – preferably web-based. Next came the suggestion of access to trained advisors and subsidised training and perhaps a facilitation fund for farm groups to support on-farm GHG mitigation. Demonstrations and case studies were felt to be potentially very helpful to share best practice, and perhaps funded farm demonstration sites to visit and learn from could inspire changes in management and farm practice.

The introduction of a farm-wide carbon levy/rebate system was recognised to probably be unpopular. Nevertheless, the group felt that financial ‘teeth’ might be needed to move more of the industry further towards hitting any GHG reduction goals for agriculture. Similar to other sectors, perhaps farms that produce too many GHG’s could incur financial penalties whilst farms performing well could be rebated/rewarded.

Pulling together the thoughts

The positive and willing nature of those at the meeting, who mostly admitted that GHG was not something that currently factors high in their day-to-day farming priorities, was tangible. They recognised that, like other sectors, they will have to play their part. But there’s a lot of catching up to do. It was explained that in order to meet the carbon and other GHG emission targets involves a reduction in agriculture of 20% by 2030.

Farmer Stephen Ashford from mid-Norfolk, acknowledged the usefulness of the session at TMAF and the value of looking at the sources of GHG emissions and how his farming can lessen its contribution to the problem. “In my domestic life, we have already been taking steps to be ‘greener’. But I have not really paid much attention to how my farming could be changed in order to produce fewer GHG” he admitted. “This has been a useful session to get me thinking”. Session facilitator Elizabeth Stockdale was pleased with the discussions. “It’s been really useful. I will collate and share all the views and perspectives shared here today at TMAF as part of the report to Defra and we expect that this work will influence the development of a framework for reducing GHG emissions in agriculture.”