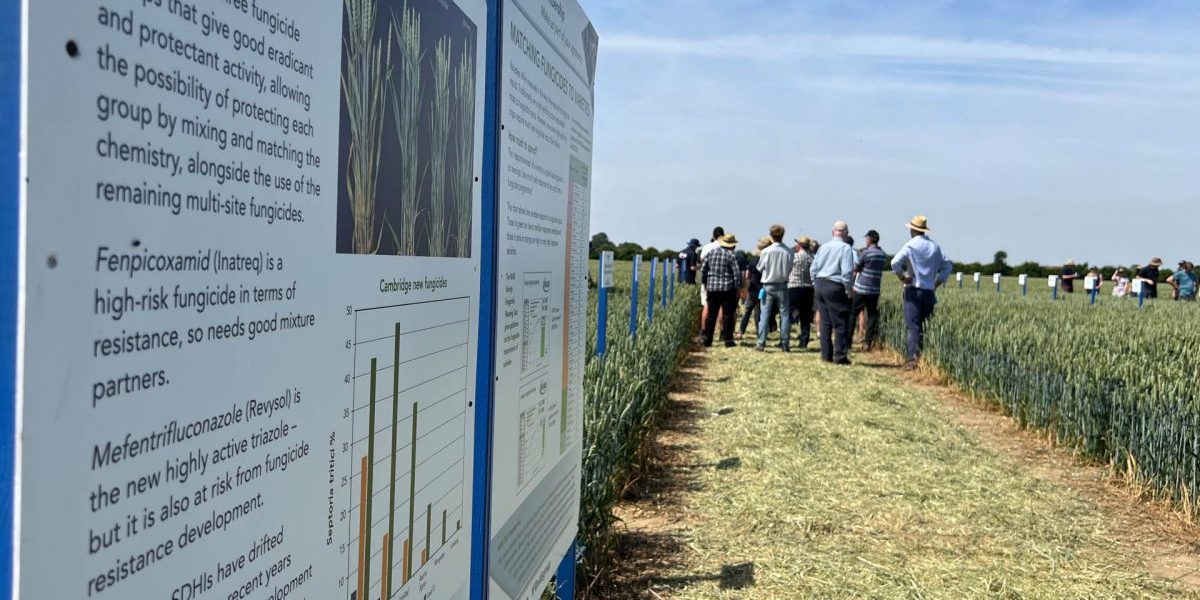 Farming is – more than ever – all about making the right choices at the right time. At the 2022 Morley Innovation Day there was plenty of expert advice on hand guide the decision-making all the way to get a crop to harvest.

More than 150 visitors – from all over the Eastern region – came for the Innovation Day trial and exhibit tour staged by NIAB and others at the TMAF Morley Farm. Trailered out to the research plots, each batch of farmers and decision-influencers was directed to join the explanations on a variety of topics. These included variety choice for wheat, the difference a chosen fungicide regime can make to margins, different cultivation options, the impact of cover cropping on fertiliser needs, how to measure soil health as well as key work being undertaken by BBRO to optimise sugar beet production.

On varieties, NIAB’s Clare Leaman gave a walking tour through a fashion show of wheat in the ground. One by one she explained the characteristics – both positive and less positive – that she and her team have seen in the varieties at several sites in the region and in differing conditions and growing regimes.

Summaries on how to weigh up choices within or between each group of wheats was combined with practical advice. For example, with Group One variety Skyfall Mrs Leaman said “Do not grow more of this than you can spray in a day. This is a variety that you have to be ahead of the game with. If that’s not for you, best you consider a variety in Group Two”. By the time the tour reached the rows of Group Four wheats, the theme of the need for realistic assessment was equally evident when the group questions included how best to choose varieties for lighter soils or likely drilling date.

To spray or not to spray to keep fungal disease away

Given that the 2022 Morley Innovation Day was held on very hot summer day and when rainfall here and on many of the local farmer visitors’ land so far this season has been scant, the need for continued fungicide treatments may be receding in some farmers’ minds. NIAB’s Stuart Knight set a serious tone on his section of the tour. “It’s easy to get lulled into a false sense of security”, he warned, “but in our trials further west of here where they had rain last month, we are seeing more and more disease. He drew the group’s attention to the long-term trials underway, thanks to support from TMAF, to put the seasonal response to fungicide programme into a long-term context.

“See how the yield response varies by year? There can be a 4-5 t/ha advantage from a precise programme (T1,2+3) some years and others where it is not cost effective. Rainfall at key times can change the season completely, sometimes when you have already chosen your chemistry and started using it. You have to monitor carefully and react accordingly.”

He finished up by showing that Members of NIAB have a fungicide planning tool to help decide what level of use to go far, what spend is appropriate and how those decisions impact on margin.

Seeking answers in the soil

The findings and the practical lessons from another long term TMAF-supported NIAB trial were explained by David Clarke. His work with the Sustainability Trial in Arable Rotations (STAR) to demonstrate the long-term effects of rotations and cultivations on clay loam.

Lifting up two fresh dug samples, he could draw visitors’ attention to the undisturbed worm holes in soil from shallow inversion compared with ploughed soil. This was the starting point for many a discussion on the day of the benefits, including financial savings, from less cultivation but also how to minimise the impact from heavy land disturbance from harvesting of potatoes or sugar beet in, often, usually less than ideal conditions.

In response to farmers’ questions on what other agronomic challenges they would also like answers for, David Clarke explained how this long-term trial is going to encompass more cultivation regimes, cover crops and also different wheats under different nitrogen regimes.

The desire to reduce expenditure on nitrogen made the talk by NIAB’s Nathan Morris an important listen. In the New Farming Systems study, he has been investigating how the use of cover crops can lessen the need for nitrogen. “I am sorry to say that it is not a silver bullet for the problem of expensive inputs”, he explained. There are some benefits and reducing fertiliser need slightly but not completely. “Responses are not always seen fully in the crop following the cover crop. They are sometimes seen later in the rotation. It is important to think through what you want to achieve, e.g. improve soil structure, enhance biodiversity or cut costs, and then make your choice of whether to cover crop and with which one.

At the BBRO stand at the 2022 Morley Innovation Day there were a basket of topical themes to choose to hear more about. These included reducing nitrogen input to the sugar beet crop; using foliar nutrients; a multi-pronged attack to aphids using the ‘Attractant, Beneficials, Deterrent and Camouflage’ approach and how to meet the target of net zero sugar beet by 2040.

Choices that made for a useful and enjoyable day

The vibe of this Morley Innovation Day was positive not least because of many of choices made when planning it.

For example, having a break in the day for visitors to take a spot in the shade of an umbrella and sit, eat, and talk with each other as well as with the specialists in attendance was clearly popular. Many will not have been aware that the choice of caterers was made to give Emma Broughton and Rebecca Lockhart and their crew the chance to cater for the day in order to raise funds for the Carleton Riding Club.

Elise Townsend, who was one of the tractor and trailer drivers on the day is the Morley Farm ex-apprentice, who after over two years of work has now completed her apprenticeship. “I certainly made the right choice to come here to Morley Farm”, she told some of her passengers.

On board the trailer she towed back to the car park, that was also the sentiment of many of those taking the lift back to their vehicles. It was the certainly the right choice to attend the 2022 Morley Innovation Day and everyone left with information and inspiration to help them with their cropping choices ahead.