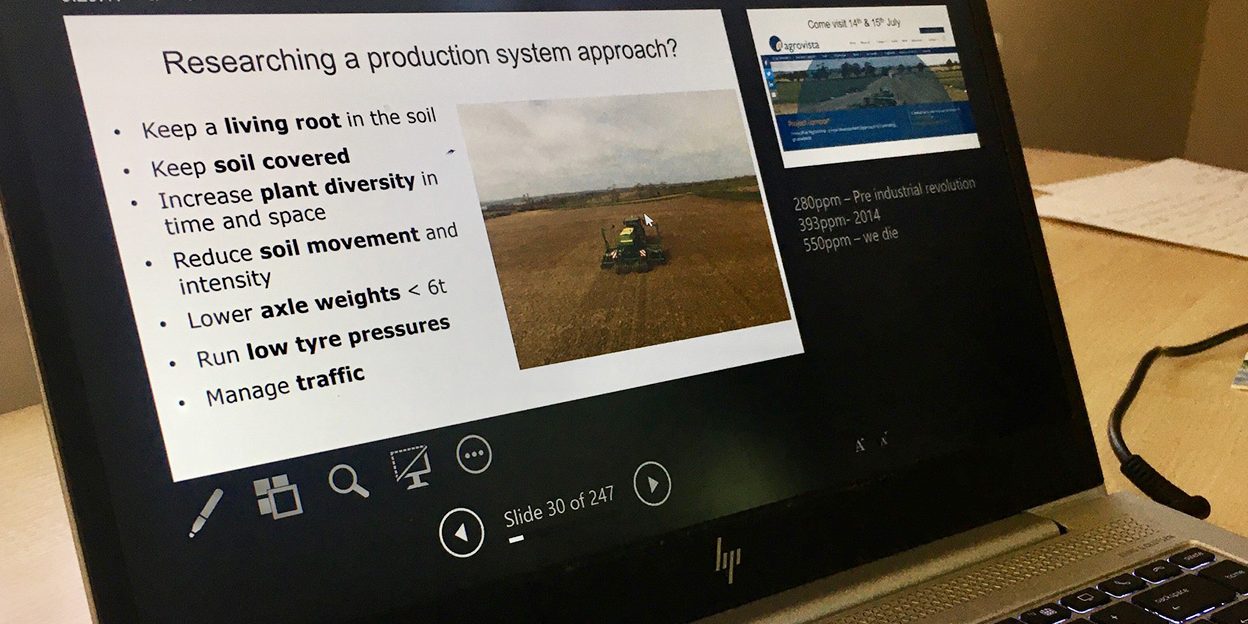 With the promise of spring in the February air outside the Morley meeting room, inside at the winter event at TMAF there was a succession of spritely presentations on promising research to contribute to better farming.

TMAF Chair John Wallace reported that TMAF continues to use its capital to support a wide range of research and other activities to “continue to seek realistic and practical solutions to farming’s problems”. All of these activities are freshly-summarised in the newly-published TMAF and Morley Farms Summary of our Activities 2020. Four of the pieces of work currently underway were reported by the scientists.

From beetles to barley

TMAF-supported MSc student Jack Davies (University of East Anglia) explained how his first love was studying the important role of dung beetles in the grassland ecosystem of his native Wales. Whilst studying at Oxford his interested switched to crops and wondering how the to enhance the function of the ecosystem around crops to the benefit of farmers.

Currently, Jack is mapping the microbiome – the distinct community of bacteria and fungi associated with each plant – of two barley varieties, Chevalier and Tipple. It seems that crops actively recruit the biome and if the genetic trait that allows plants to recruit beneficial bacteria that help growth could be identified it could then be used in varietal breeding.

TMAF-supported PhD student Joe Martlew (Cranfield University), who has previously shared insight to his work, gave an update on the current and next phases in his studies.

With a mix of field and lab work, his research into the detection and interpretation of subsoil compaction is progressing well.

There was considerable interaction with the Winter Event audience on what equipment and soil management practices are proving best to deal with compaction. Advice and observations were shared. However, Joe called for farmers to adopt what he refers to as “better field discipline”, to plan soil management better and reduce damage to soil and compaction in the first place. “Avoiding damage in the first place is a strategy that works better than any of the remedial work that I have done”, he warned.

TMAF Farm Manager David Jones talked the TMAF Winter Event audience through the farm’s new approach to measuring and managing water quality. The Morley Clean Water Project has been up and running for six months. The aim, said David, is “for the water running away from the farm to be as clean, if not cleaner, than when it arrived with us”. The work underway was illustrated with several examples including sympathetic ditch work, positioning of V-notch dams to catch silt and consideration of where yard and roof water goes.

Measurement is a key part of management. David introduced two new tools that he is using to assess water quality for turbidity (particle content) and phosphates.

Having acknowledged the help received from organisations including Anglian Water and Norfolk Rivers Trust, David finished with a call to arms to all the farmers and landowners listening. “As land managers we all need to contribute to improving water quality in catchments and reducing risk of flooding to homes within the farm’s area and further downstream. Each one of us needs to think through and ask ourselves “what can I do?’, ‘what’s my part to keep water on my farm as clean as possible?”.

The next inspiring presentation from a TMAF-supported PhD student was delivered by David Purdy. David’s studies are being completed whilst continuing his career in farm machinery and alongside his day-to-day work as John Deere Territory Manager for East Anglia. His drive to look for answers and practices for how farmers could have a production system approach to cropping certainly impressed the audience.

Now half-way through his PhD, David Purdy gave a glimpse of his investigations so far into effects on soil health, compaction, grass weeds and yield from using the plant rooting systems of cover crops versus low disturbance tillage methods in a spring cereal production system. He described the extent of his replicated trial plots and the considerable effort required to create, for example, the compacted soils to investigate.

In the course of his research, he admitted, he finds that he is asking more and more questions. “What are the role of cover and companion crops in soil health and yield? Whether plant root systems can help alleviate the effects of compaction? What role tillage and soil disturbance have on the production system?”. His drive was evident but also that his everyday contact with farming combined with his research, even the early observations, is making him pose some fundamental questions about what machinery – and weights – farmers choose to use to farm.

The TMAF Winter Event proved to be another example of the power of the Foundation to create a positive chain reaction: TMAF’s prudent investment in selected and committed researchers who carry out robust research that promises to deliver interesting outcomes and practical answers to some of this region’s pressing farming problems.