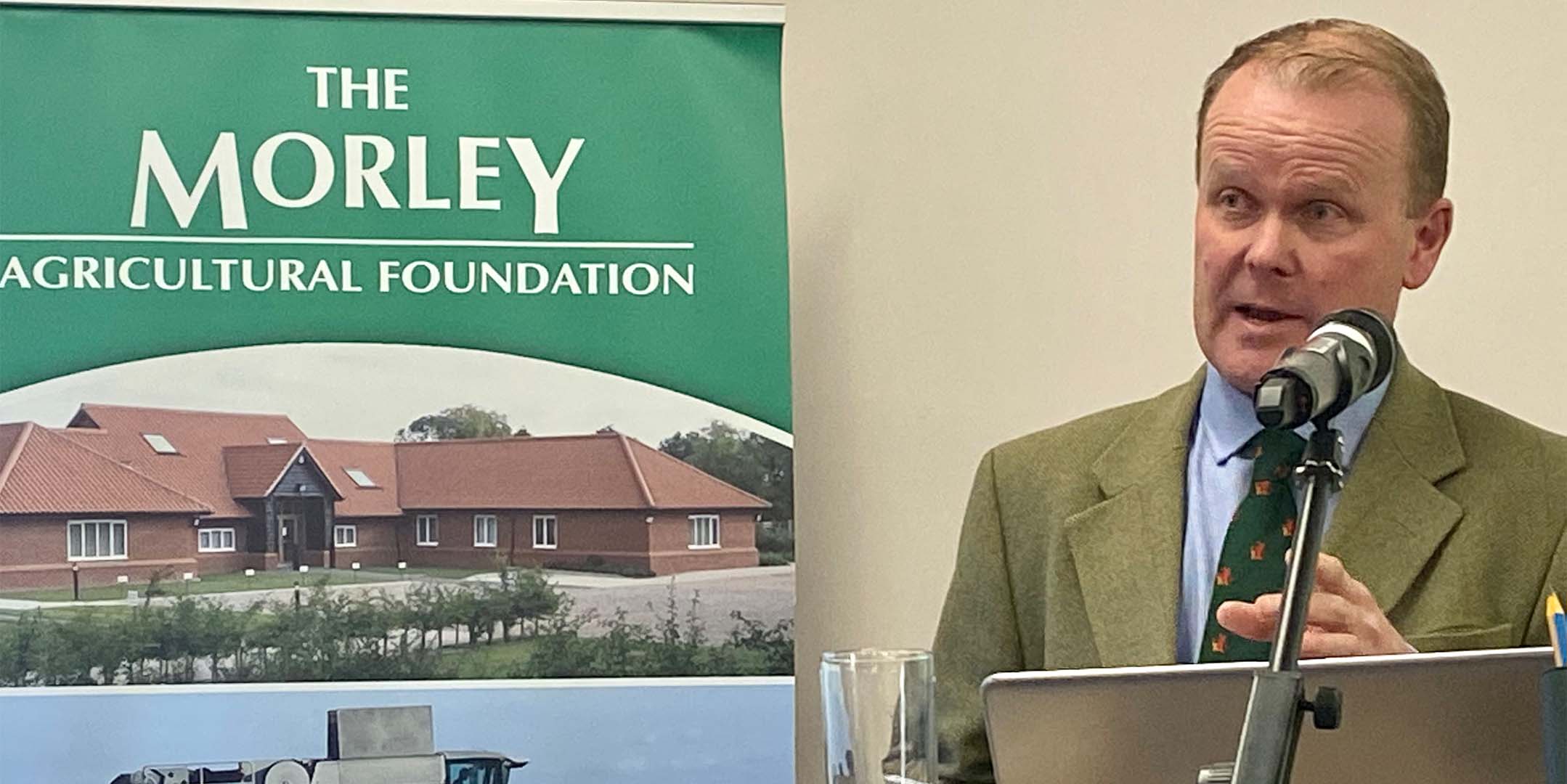 The twin themes of meticulous measurement and careful management recurred throughout the presentations by young TMAF-supported researchers Joe Martlew and David Clarke and experienced and award-winning Suffolk farm manager Edward Vipond during our Winter Meeting at Morley Farm.

Our invited audience – the biggest yet – of farmers, landowners, agronomists, advisors, and researchers enjoyed an afternoon array of thought-provoking evidence, experience, and anecdotes. Not only did the audience learn from the presenters. As guest speaker Edward Vipond put it “the two PhD presentations I’ve heard this afternoon make me question what I’m doing on farm – and what I should be.”

Getting to the root of subsoil compaction solutions

The first PhD presentation of the afternoon and his final one to a TMAF audience, now that his study has ended, was by Joe Martlew. Many in the audience have sub soil compaction on their land and are interested to know how to alleviate it. Joe explained the careful recording of the effect of using ploughing between cereal crops or alternating plough with cover crop cultivation.

Joe described how he has used different methods (and their disadvantages): the traditional penetratometer (not as good as it is believed to be), electro-magnetic conductivity which collected 1000’s of data points (but hard to set it to get just sub soil readings) and finally the sub VESS soil classification spectrum (takes most time and effort). Which does he favour? “Sub VESS. But you must dig down and take a look and that takes a long time. But the insight you get is fantastic.” Can you alleviate subsoil compaction with cover crops rather than steel. “Yes” came Joe’s answer, “but it takes a long time.”

NIAB’s David Clarke presented next. His first year of his PhD research in the Morley SAMS project is “already providing answers to some of the questions I hoped to answer”. His research so far can be summed up in three activities with yield data: capture, cleanse, and correlate.

First, he is capturing data through comprehensive annual yield maps for thousands of yield points in each of the 53 fields on 435 hectares at Morley farm. That includes the historic records at Morley gathered by TMAF Farm Manager David Jones from 1.2 million yield points over the last ten years. Next, David Clarke explained, comes the processing or cleansing of the data. “The raw data is incredibly ‘dirty’ and needs to be put through a computer programme to take out the anomalies when low yield is recorded but in fact the yield is OK. The outcome is that with my computer analysis we end up with a true picture of yield over time. Lots of farmers now pass on their yield data straight from the combine to manufacturers. Perhaps the manufacturers should process it and pass it back to the farmers themselves?”

Finally, the yield data is overlaid with the detailed evidence of soil type across the farm. There is more than one. “In fact, most of the soil classification types have been found across the 30 SAMS fields.”

How to manage the soil to maximise yield

It is already clear that the seasonal conditions affect the yield more than soil type.

However, some of the performance in fields, or in zones within fields, is explained by consulting other Morley information.

For explain, looking at aerial photographs of fields as well as their names gives reasons for soil type and yield now. A field that was grass until the 1970’s has high organic matter still.

As one audience member pointed out a good study raises more questions than it answers. David Clarke agrees. “Even poor yielding areas in 2014, went on to outyield high yield areas in 2017,18 and 19. The questions I want to answer are ‘why?’ and ‘how do we determine the field management required to raise all areas of the farmed land to high stable yields?’.

“This is measuring the yield, but how to manage the land to optimise that yield, we’re not there yet. My work aims to help productivity decisions, but it can also guide which pieces of land to take out of production altogether.” Follow David Clarke’s SAMS project.

Farmer Edward Vipond, the final TMAF Winter Meeting speaker, has gone to great lengths to learn all he can in a career path in different parts of the UK and travels as a Nuffield Scholar investigating precision agriculture. Now, as farm manager of Troston Farms Ltd near Bury St Edmunds, he has a clear approach to problem-solving, decision-making and managing risk.

The Vipond vision, he admitted, was a touch gloomy. “One bad decision and, for example on my heavy land, I can plough up a whole new delivery from the weed seed bank. There is plenty of blackgrass down there waiting for me”. As well as looking down he’s looking up too at the fast-approaching financial, climatic, and other pressures which make growing crops, on particularly his light land, very risky.

What he sees is not all bad. “We’re not all doomed”, he said, which raised a smile in those who remember that Dad’s Army catchphrase. An appropriate choice of words, as a significant proportion of the land Edward manages is Breckland, the landscape location for filming that comedy classic.

Sunshine in the gloom

The ray of sunshine was not just his impressive (in colour and financial returns) 40 hectares of sunflowers on some of his lighter land. But his reason for growing them. On very light land I need to choose a low-risk strategy. “Sunflowers are cheap and easy to grow, only £55-65/ha in costs, the price is good as is linked with oilseed rape and there is a biodiversity gain with a pollinator feeding frenzy when they are in flower. This is just one example of how we have to farm cleverly and be versatile to reduce risk to the business.”

Our TMAF Winter Meeting is evidence, if it is needed, of our continuing commitment to evidence-based research and experience to inform and guide the decision-making and risk reduction by farmers throughout our region.